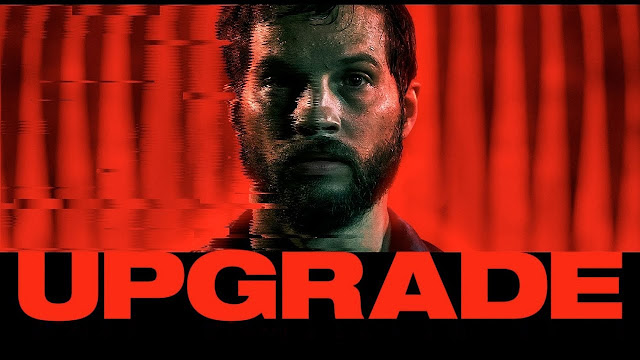 'Upgrade' is the latest from Blumhouse written and directed by Leigh Whannell starring Logan Marshall-Green and Betty Gabriel and premiered on June 1. It’s an action, sci-fi, horror film set in the near-future where technology controls nearly all aspects of life. It follows a technophobe (Logan Marshall-Green) who is implanted with a computer chip that allows him to seek out revenge after becoming a quadriplegic. It was an action-packed ride in the sci-fi world, and we recommend you go see it in theaters.

Although many shots had the “stabilization” look to them, it didn’t detract from the action at all. The last time I saw this type of movement done purposely was in the IT remake. I’m typically not a fan of it - as I’ve seen the bane of the stabilization effect warbling the background with a strange parallax - but it really played towards the aesthetic of the action.

As we have our roots in horror, we completely loved the first kill Grey committed with the knife through the guys mouth. I think I was the only one laughing out loud when I saw it. Great job!

The situational comedy brought out a few laughs and broke up the monotony as it directly played to some of the awkward moments Grey had to face while adjusting to Stem.

Another good aspect was that the technology and rules of the universe were established really well without technically having to explain too much with exposition. There was definitely a blend, of course, but I didn’t feel as if it was spoon-fed with explanations.

Though the story had relatively good pacing, there were many moments I felt tried too hard to extend drama or attempted to force an art film feel to it. Playing too much towards those moments took us out of the action and almost had us watching our watches for the next interaction.

One interesting point Hooligan V brought up was that it was strange how a film like this was marketed. We hadn’t even heard about it until a week before it premiered, and it felt as if the roll-out was rushed. Although that doesn’t really have anything to do with the film itself as an entertainment piece, it was still something that was in the back of our minds the whole time.

Despite the first kill making a great impression, I feel that the rest of them didn’t really live up to the same level of badass-ness opting for more cutaways than anything. The one head being blown off comes close to it, but it was too quick and had less of a reaction from the first one with a lowered gore factor.

The predictability of the major plot points is probably one of the biggest downsides of the film. Furthermore, if you can get passed the deus ex machina of Stem and the other cybernetic enhancements, then it should be easier to get lost in the action, which is what is best for a film like this.

Regardless of the few drawn out dramatic moments, 'Upgrade' is a fantastic action flick that you can really get lost in for its aesthetic alone. It was well executed, and I wouldn’t mind watching it again. We both still recommend seeing this one in theaters for sure!