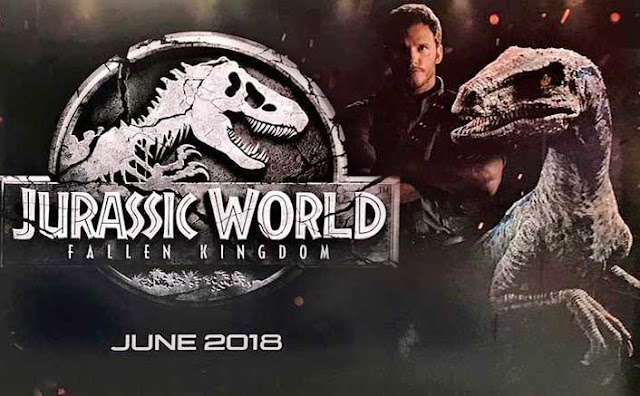 The Hooligans went to see Jurassic World: Fallen Kingdom in theaters tonight! What a ride it was! First off, I'm going to state that for the past decade or so, I've turned more cinephile than bibliophile. Film has taken hold of my heart which is why I got into filmmaking. So, to be clear, I have not read any of the Jurassic Park novels so my take on this is purely from my perspective as a movie lover and movie maker.

Fallen Kingdom had an interesting premise to continue the franchise and felt complete on its own. When Isla Nublar's dormant volcano begins roaring to life, Owen Grady (Chris Pratt) and Claire Dearing (Bryce Dallas Howard) mount a campaign to rescue the remaining dinosaurs from this extinction-level event. The film was directed by J.A. Bayona and premiered in theaters today.

The very first and foremost plus that hit my list was that we FINALLY got to see some dinosaurs eating people again! Whew! I've been waiting so long for them to bring back the old school feel of dinosaurs being dangerous again, so I'm thankful that they did it here even if I preferred more blood.

The plot felt like it was original despite so many people claiming that it was all about a new dinosaur being created a la the first Jurassic World. However, that was not really the case here. The Indoraptor (as they called it) was a small plot device to move the story forward while raising the stakes and danger level in the end, but it was not truly a huge plot mover as it was before in the first one. It was not as distracting as so many people put it, and the action and flow of the story had some good movement forward. Anyone that tells you otherwise sounds more like they weren't paying attention or as if they want something to complain about (don't worry, there's plenty to complain about below).

There were many callbacks to both Jurassic Park and Jurassic World, but I felt they weren't really spoon-fed to us in a way that felt forced (that was a hit on Solo - see my other review). Many were situational and simulated scenarios (and some shots... so many S's in that) that brought back a bit of nostalgia, but I felt like they truly owned it every time save for one (see below).

The quips from Starlord- I mean Owen, were fun to break up some of the scenes, but it also did not feel like it was forced as some people would have Chris Pratt play his usual sarcastic, off-the-wall characterization from other movies. To me, it felt like a natural progression of inserting his type of humor and personality. I also liked that it wasn't just him with some of the funnier lines.

The suspense building and action were there most of the time and really brought it back to the situation at hand. It was also nice to see BD Wong and Jeff Goldblum playing smaller roles in this as well, even though Wong was also back from the first Jurassic World.

The last good had to do with the major reveal that Maisie Lockwood (Isabella Sermon) was in fact a clone herself. They did a moment of reveal that didn't really feel like a reveal when she was looking at a picture of her "mom" when it was actually her. They played it off earlier saying she looks just like her, so it didn't really stick until later in the movie. Both Hooligan V and I thought it was an interesting addition to the level of genetic technology because nobody had ever mentioned trying to clone a human until now (even though it did kind of feel like a throwaway explanation).

The first thing that caught my eye was a couple of awkward eyeline mismatches in the beginning at the meeting with Benjamin Lockwood (James Cromwell). The scene wasn't meant to confuse people, but we had Lockwood and Claire looking in the same direction. The crew had a Script Supervisor AND an Assistant Script Supervisor which makes me question it more. Also in that scene, they did a strange job of having tertiary characters walking in the background that took away from the information Lockwood was conveying. I understand the feeling of needing to establish when some characters enter, but don't do that when you want the audience's attention on the characters talking - it's too distracting.

Though most of the film felt like it flowed and paced well, there were some instances where both Hooligan V and I felt were awkwardly cut too short. One instance was of the overhead shot where Owen, Claire, and Maisie were hiding from the Indoraptor in the museum as they ducked into hiding. Those moments were few-and-far-between, but they were still there, noticeable, and took us out of the story for a moment.

One of the action sequences that felt a bit strange was when Quill- I mean Grady, was saving Claire and Franklin from the Gyrosphere as it was sinking into the ocean. I don't know about you, but I felt like that knife would have broken way before being able to pry open the door; the same door Indominus Rex couldn't open without a great amount of crushing power (damn those opposable thumbs).

Another thing that felt awkward was the callback timing for the T-Rex on two strange occasions which ended with the classic Jurassic Park T-Rex roar. The first was when Peter Quill- I mean Owen Grady was behind the Gyrosphere and the other dinosaur almost got him. Enter T-Rex to save the day-ish. The second time was at the very end in almost the exact same scenario but with Mills (Rafe Spall) getting eaten... and again, close with the classic Jurassic Park T-Rex yell. The only thing that would have sealed the deal to make it worse would have been if a banner that said "Jurassic World" fell in front of it; I'm happy they didn't do it.

Going back to Benjamin Lockwood, I think that was one of the strangest additions to the movie. Lockwood was never mentioned before but was somehow pivotal in the creation of the first dinosaurs for Ingen and thus the rest of the Jurassic Park. It seemed strange to have this entirely new character that was never mentioned before who apparently had such a huge role in the franchise.

Aside from adding in a secretive character, the film had a number of plot holes in it that just didn't make sense or could have been played out better story-wise. For instance, why did Maisie go outside to the balcony if she just got the key from the door after getting locked inside? I may have to re-watch the scene again, but I could have sworn Mills took the key out in the first place, but then it came back still stuck in the lock. Why would she risk climbing to her grandfather's room on a ledge rather than just using the key she worked so hard to get and leave the room? Another one was with the dumbwaiter. If the dumbwaiter went all the way down to the bottom floor of the "highly secure" lab, why did Maisie even bother trying to memorize the keypad to take the big ass main elevator down in the first place? Couldn't she have just made it down through the dumbwaiter that was literally connected to her own room instead of risk getting caught??

Although I felt good with Indorapter not being the centerpiece of the story, the end scene on the roof felt off as well. First of all, when Maisie was dangling on the edge holding onto Owen (hey, I got it right this time), you can clearly see a flat ledge that she could have easily stood upon that wrapped along the side of the entire windowed area. That ledge is literally where Owen, Claire, and Maisie were standing and looking down into the Dinosaur Museum to talk to Zia and Franklin (Daniella Pineda and Justice Smith).

OK, so even though there were some major snafus in this one, it was still really entertaining and fun to watch. That's one thing I enjoy as a cinephile - that despite all the mistakes, I can still enjoy a movie and NOT feel like a pretentious dick while watching it. The callbacks weren't too distracting as a whole, and the story kept movement forward. The problems I had with it had zero to do with what a lot of naysayers have been saying about the new dinosaur but with other aspects of filmmaking instead. I'd still recommend seeing this one in theaters.