The film industry is inundated with creators and entertainers pushing to win over audiences in the hopes of becoming an overnight sensation and possibly a worldwide influence.  Indie filmmakers (like us) are always at the helm of finding new and innovated ways of getting noticed outside of the Hollywood system.  However, a growing trend has been rearing its ugly head among indies and even studios that's been influenced by the polarization of our political system.  Though this isn't a political post, it's worth pointing out that the result is (wrongfully) making headway in order to push political agendas directly into the storytelling process.  That trend is the prevalence of the didactic story.

Didactic
Adjective
1. intended to teach, particularly in having moral instruction as an ulterior motive
2. in the manner of a teacher, particularly so as to treat someone in a patronizing way

I often tell people that audiences go to the movies to be entertained, and they go to church to be taught a lesson, but that still doesn't stop them from wanting to push for the didactic film for their own personal reasons.  I've lost count of how many horrible stories, movies, and shows we've come across that contain the overarching agenda of "teaching" the audience how to behave, how consequences work, or how they will be dealt with, and they just leave horrible tastes in everyone's mouth.  Your #1 goal as a filmmaker is to entertain, not to teach - that's why it's called the "Entertainment Industry."  In fact, the moment you feel you know better than the cumulative brainpower of the entirety of your audience is the moment you will lose them.  That sort of arrogance is what's been getting these filmmakers in trouble and threatening their fan base and reception as a whole.  You want a surefire way of stifling your growth as a filmmaker?  Make a didactic film.

To be clear, this is not to say that your film cannot have zeitgeist themes and topics like the current political polarization, but rather that when doing a film for entertainment, the politics of that world need to stay within the world of the characters and not try to breach into the audience as a force of example teaching them something.  Relating a protagonist to an audience on a fundamental level is crucial to most storytelling, but it does not play well when forcing inauthentic characterization out of the film's universe.  Audiences will suspend belief over fictional fantasy that is consistent throughout but not at the expense that the creator is somehow "smarter" or "knows better" than they do in terms of morality.  This is exactly why didactic films fail.  It's been the bane of church films for years now (not religious films; church films) - "let's make a film to teach the ignorant about how they're wrong for behaving the way they do or having a differing opinion"... it's absolute rubbish.

One recent example of a didactic film we came across was a movie from Hulu's Into the Dark series called The Treehouse (bit of a SPOILER ahead - skip to the next section).  The trailer?  Fantastic and compelling; made us want to watch it.  The conflict?  Alluring with a sense of mystery and fantasy when it FINALLY picked up (almost 45 minutes in - ugh).  The actors?  They performed well.  The story and payoff at the end?  PFFFTTT!!!  Didactic bullshit!  The consistency of the universe they built ended as if it was some huge joke to fool not just the protagonist but the audience as well in lieu of forcing a lesson rather than portraying a snapshot of an interesting story.  In fact, if they would have just stuck with the supernatural theme being real, then they wouldn't have screwed the pooch every which way but loose.  Instead of delivering on the promise of being a supernatural fantasy thriller, the story fizzled out and let everything go as a picturesque of downtrodden women getting back at one asshole of a man (who was the protagonist, no less) - their efforts now lessened in the face of the lesson they wanted to teach the protagonist AND the audience.  The overall message was that men shouldn't rape women (admirable and very true, but again - this is not church) or else women will lash out together like a coven of witches pretending to fool you into believing magic is real.  It was actually counter-intuitive to the #metoo movement and downplayed it by reducing real women who have been victims of rape and sexual assault to conniving, vengeful bitches who hate men that will do anything to "trick" them into believing what they did was wrong instead of seeking real justice.  Sorry, but that's a real shitty kind of representation there.  This is also outside of the fact that there was no empathy for the protagonist - there was no one the audience could relate to by the end of the film since they pulled away from the protagonist and didn't build enough for the witches.  If they would have told the story from the women's side to begin with (to stick to their theme by the end), then we would have felt more driven to agree with their situation.  That's what happens when didactic-style film making takes over good storytelling and structure - they don't fall flat, they fall under.

One huge tip to ensure you stay away from didactic-style writing is to keep the political world surrounding your protagonist and characters as external forces for them alone.  The Rules of the Universe can align to authentic situations we have in the real world for inspiration, or they can be completely made up and as wild as you want them.  However, they need to stay in that world instead of try to reach outside of the confines of the story to purposely influence the audience towards a lesson of your choosing.  If you want to teach people morality lessons, then become a Preacher not an Entertainer -  unless you're really adept at satire.  If you believe your lesson somehow holds a moral high ground that justifies making a didactic narrative, then you have no real understanding of the entertainment business at all nor what makes a good story. 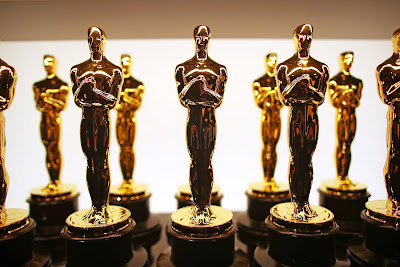 Though the Academy's Oscar Awards broadcast went off without a hitch - albeit a small one with everyone mistakenly thinking certain categories weren't going to be broadcast at all, and a host controversy with Kevin Hart, and a- well alright, definitely not without a hitch this year, but it's done with so we can move on... or so we all thought.

I'm talking about Alfonso Cuaron's Roma, which is streaming on Netflix.  Last year, the Cannes Film Festival made waves when it barred submissions from Netflix that had bypassed a full theatrical release in lieu of premiering on the streaming giant after only 3 weeks in theaters.  Then that all changed when Roma took home 3 Oscars along with a nomination for Best Picture just a couple of weeks ago.  Pressure has now been building against Cannes in this rift with the onset of Martin Scorsese's Netflix-backed film The Irishman due to debut this year.  Although Netflix has already committed to a theatrical release, it stands at a stalemate with theater distribution giants like AMC and Regal that hold a strict 90-day run before releasing to streaming services.

There have been many people in the industry that are voicing their opinions against allowing Netflix and other streaming films to be eligible for festivals and awards.  In an article by The Hollywood Reporter, it states that Eric Lagesse, the co-president of France's association of independent theatrical distributors, "worries that Netflix's model of bypassing theaters will undermine the independent industry, especially as the streaming giant, so far, has focused most of its money on backing established directors, neglecting young or first-time filmmakers."  Though I can sympathize with his point of view, I don't necessarily agree with the statement on a worldly basis.  Perhaps I'm a bit bias considering theatrical release here in the US already undermines independent theatrical releases on its own, to which Netflix and other streaming platforms have overcome this obstacle in their own way to show both big-budget films as well as ULB films of independents alike in one place.  I digress.  Even Cannes director Thierry Fremaux had reportedly offered a compromise with Netflix whereas he will consider The Irishman and other Netflix titles a chance to compete in the Cannes Festival under the caveat that if they win the Palme d'Or, Netflix must release their titles for theatrical release in France.  (The Hollywood Reporter - http://bit.ly/2C2dnJX)

Steven Spielberg has also been very outspoken about streaming films and their eligibility for awards.  As a member representing the Directors branch of the Academy, he will be following suit with Fremaux's decision last year to bar streaming content by approaching the Academy to change the rules against future nominations.  Regardless, there are others that do not hold the same opinion like Ava DuVernay who took to Twitter to express her concern against others that aren't Spielberg that may not have their voices heard.  It's reported that DuVernay has supported the Netflix model as a legitimate platform for us independent filmmakers - hey, kind of like what I was saying earlier.  (Collider - http://bit.ly/2SCU0wr)

Although many big-named influencers are speaking out against streaming content, this does not seem to be stifling any of the larger studios from continuing their venture into the streaming world.  Disney, TimeWarner, Universal, and others are already ramping up to break into the streaming game in an attempt to follow the Netflix pioneer.  Cable is slowly phasing out as streaming content is proving a pivot in the market, and the larger studios know this.  It's easily speculated that these giants will be offering exclusive, original content, some of which may indeed bypass theatrical release on lower-scaled budgets.  Large theatrical releases cost a lot of money, and if audiences are pulling towards streaming content in the comfort of their own homes rather than the allure of the red carpet release or popcorn-littered theater, then that is where the market of the future lies.  Does that mean that theaters will phase out completely?  I seriously doubt it'll go that far, but only time will tell which will lead in sales for film distribution.  Thus the Streaming Wars is not just about releasing new streaming platforms by big studios, but also that of viewership in competition against theater distributors.

There's a lot of movement at the moment for film and filmmakers in terms of the dreaded "D" word (Distribution, in case you had your mind in the gutter).  The biggest fear as an independent filmmaker is that other indies will begin to downplay the theatrical release and consequently the broader appeal to larger audiences; eventually settling on stories that aren't entertaining and that won't necessarily get their careers off the ground.  We've personally seen the festival crawlers that are still seeing other short film competitors as their competition, relying on the old hope that they will get discovered and become a huge Director or Producer... that's not how it works, sorry.  Even we at Hyde Hooligans still talk about how Netflix remains secondary in the distribution model to theatrical release for exactly the same reasons these distributors are arguing.  Understanding what's going on in the industry and acknowledging the distributors' views is what will help us all (independents and otherwise) to move forward with the ever-changing flux of entertainment.