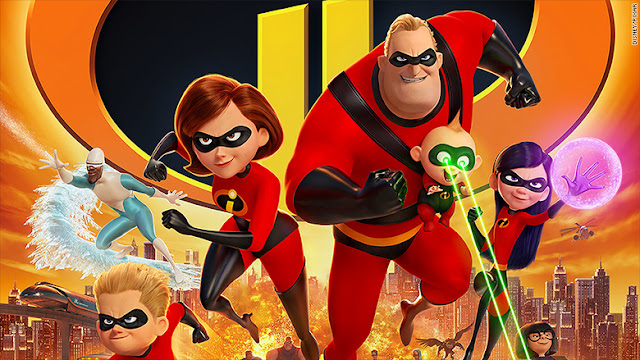 There's not really many movies where I don't have something critical to say, but this one does it for me! I got to take my family out to see it after the Father's Day weekend rush. Here's a quick review of 'Incredibles 2' that premiered last week!

At the opening of the film, there was this strange PSA from the actors about the animation taking 14 years to come out with a sequel but will be worth it in the long run. I thought it was an odd way to begin a film, but they weren't wrong! As I said, there isn't much to say about 'Incredibles 2' other than it was a fantastic and entertaining ride!

They did many recalls back to the original movie and made room for a lot more. There was one time a character said "crap," but I've got a sailor's mouth so it didn't bother me. However, it made me think twice as my kid was sitting next to me for some reason.

The one thing I was curious about (not a major spoiler here) was that I thought the family already knew that Jack Jack had superpowers already from the first film. I knew the babysitter knew, but I had sworn that they picked up at it when he attacked Syndrome. I could be completely off base here as it has been awhile since I've seen the first film, but it did play a bit of role in this story. I will say that one of my favorite parts was with Edna.

The plot arc uses a lot of parallel stories going on at the same time; not-so-much a multi-plot but just a couple perspectives in the overall timeline. I thought it was done well enough to not pull me out of the overarching story which is a feat unto itself, and they definitely added to each other to build good tension.

Overall, 'Incredibles 2' deserves the blockbuster box office opening they had this past weekend. It was entertaining, fluid in its story, and had a lightheartedness that was both humorous and relatable. I highly recommend you go out and see this with your family and friends.