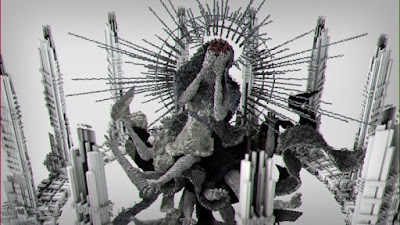 I've been holding off on writing this for a very long time, and I figured the New Year was a good time to finally let it loose and start off with a clean slate.  I grew up in the digital cultures that are prevalent today - social media, gaming, video content creators, etc.  As humanity embraced technology and took to the Internet, nobody could have predicted the psychological shift that occurred as we moved into the Digital Age.  Technology expanded exponentially as companies raced to get the latest and greatest out on the market before their competitors; and the world of consumers ate it all up.  In Visual Culture, we study the impact of symbols, advertisements, and other artwork and how they influence us sociologically and psychologically.  It was here that I began breaking down how the digital world affected myself, the people around me, and the world.


What Is A God Complex?

According to Vrinda Varnekar of PsychoGenie.com, a God Complex is a personality flaw rather than a mental disorder but is closely related to the Narcissistic Personality Disorder.  More specifically, it is "a psychological illusion... a personality flaw in human beings, especially those with great power, who perceive themselves to be omniscient and omnipotent, and treat others as mere mortals."  Though it may seem far-fetched to equate the digital culture to feeling omniscient and omnipotent at first, there are actually many overlapping layers that contribute to promoting the behavior.  Varnekar continues by outlining 5 characteristics of people with God Complexes possess, listed below.


Extremely arrogant: People having this complex are arrogant to the point that it becomes very annoying for others. These people believe they are the best at everything, and everyone else is très inferior to them.
Judgmental: This complex makes people very judgmental. They constantly scrutinize others' actions, and label them as bad, or not up to the mark. They cannot stand from not judging everyone and everything apart from themselves, and this judgment is almost always negative.
Cannot tolerate criticism: Similar to narcissists, people with a God complex are absolutely allergic to criticism. They cannot tolerate anything that even mildly contradicts their beliefs or actions.
Need to influence: These people feel the uncontrollable need to influence people, and any given situation. As a result, they are shrewd and manipulative, and feel free to "use" people as and when they please.
Addicted to power: More than often, people with this complex are those with a lot of power over others. They feel the ever-increasing need for more power, and to exercise that power in every way possible. They cannot bear to relinquish control, in any situation.


Are these traits starting to sound a bit more familiar?  So many people talk about how social media platforms, like Facebook, are wrought with the arrogance of perfection and infallibility.  It has snaked its way into our every day lives, and we, as a relative newbies to the digital world (albeit over ~35+ years), have fallen for its guise AND ACCEPTED IT as the norm.  Outside of a lack of personal accountability, the prevalence of propaganda as a whole has driven our politics into vast polarization.  Although I tend to shy away from political speak, there is no doubt that this Digital Demon has found a comfortable home within social media and gaming platforms.


Other Signs Of A God Complex: A Journey Of Self-Reflection

Some other characteristics of a God Complex expand from the above mentioned characteristics.  Many of these were from my own personal experiences I noticed were inhibiting my growth psychologically and sociologically.  Through honest self-reflection and time I was able to see how the digital world created fertile ground for the growing negativity inside myself.

One of the biggest telltale signs that triggered a red flag was an uncontrollable abundance of anger and frustration that seemingly leapt outward in bursts.  Although this usually arises from excessive negative stress, the digital world only increases these frustrations.  The very nature of playable characters in video games is that of playing a "god" of sorts.  Our avatar jumps when we tell him / her to jump, they shoot when we tell him / her to shoot, and they practically never refuse to obey our orders unless it doesn't move the story forward.  What happens when the character does not accomplish what you set it out to accomplish?  You lose the game or have to start over, which often leads to angry outbursts.  Gamer "rage quits" and explosive reaction videos have become notorious points of humor regardless of many people experiencing them.  This sort of behavior is not exclusive to just games either.  Social media platforms are also notorious for abusive outbursts among users across even the most harmless or well-intentioned public posts.  This happens for various reasons related to subconscious objectification.

As previously mentioned, gaming avatars give us godlike abilities in controlling avatars in the game - the nature of gaming.  However, social media also creates the same type of outlook on a much more real level.  We subconsciously see others as profiles, not people, which makes it easier to "go off" on them when they disagree with our point of view.  It also allows us to hide behind a digital wall and gives us an "out" in terms of personal accountability - you can talk to a wall all day and still feel superior to it when it doesn't do what you want.  Many of the negative outbursts and verbal assaults would almost never happen to a person face-to-face due to the Immediacy Factor (those in your immediate, physical space).  This point, though, has become debatable considering there is an entire generation that has grown up exclusively in the Digital Age with many who have moved away from physical, social interaction.  School, sports, and community events were ways to help condition people on handling social situations (optimistically with grace and poise), but these are now replaced with Instagram models, meme wars, political propaganda, etc.  As people are choosing to spend time online today more than ever before, these last few generations are lacking practical social interaction and understanding.  As we are social animals (it's literally built into our systems), we've lost touch of what it means to actually interact with each other in real life like civilized humans.

As we treat more people online like avatars and profiles rather than actual people while hiding behind a digital wall, we lose a huge higher brain function: empathy.  Empathy is defined as the ability to understand and share the feelings of another person.  As we are born egocentric, empathy is considered a higher brain function afforded to those that have their basic needs met (i.e. food, shelter, clothing, etc) as well as other areas of human life (i.e. spirituality, finance, career, physical, social, etc).  The majority of people with a social media presence have their basic needs satisfied.  The "social" portion of the pie, however, is vastly unbalanced and fills the world from an easily-accessible digital standpoint; and the other aspects of growth and fulfillment suffer in its wake.

With regular objectification and a lack of empathy paving a darker path on social media and gaming, the God Complex is fed on a daily basis; a profile can never be smarter than a living, breathing "me".  If any person has an idea we even remotely disagree with or does not align with our own beliefs, we often deem them "negative," "unworthy," "a waste of time and space" - let alone people that hold beliefs on the opposite side of the spectrum from our own.  Should someone say something we don't like on one of our posts, we can immediately delete their response, unfriend / unfollow them, and block them from ever being present again in our digital, social life.  This doesn't happen in real life, which is why people have become more socially awkward than socially present, and the control becomes more appeasing to our senses and supposed sanity.  Intolerance is defined as the unwillingness to accept views, beliefs, or behavior that differ from your own.  It should be noted that "acceptance" does not mean "agreeing with" other views but rather that you merely accept that alternate views do exist logically and wholeheartedly.  As those responding are considered "profiles" and not "people" (on a subconscious level), many of us take solace behind any sort of digital wall and do not treat other digital beings as actual, equal human beings.

Intolerance has grown to be the new norm across social media and is often hidden behind faux altruism (making decisions based on a false sense of global / universal benefit over personal gain; often expressed outwardly) and "open mindedness".  In place of dealing with intolerance directly, people have reverted to their defense mechanisms instead; particularly projection.  A psychological projection is a defense mechanism where one subconsciously projects undesirable feelings or emotions onto someone else rather than admitting to or dealing with their unwanted feelings.  As the God Complex is a daily occurrence and is not being dealt with, many people knee-jerk a projection of their own insecurities as if others are the ones committing such negativity.  This is similar to racist people regularly calling others racist.

While anger, objectification, and intolerance are protected by the self-defense mechanism of projection, people move even further away from personal accountability and growth on a personal level.  "Spiritual" is personal growth through internal reflection; it does not necessarily mean "religion."  Religions were initially created to give people a system / community to develop and mature as humans, which was eventually corrupted by human greed and used as a system of control.  Still, the original purposes are not entirely lost and still hold self-reflection as the forefront of personal accountability.  Those that are caught in a God Complex often feel they do not need to grow as the rest of the world has something wrong with it while their mindset remains the infallible truth that needs to be replicated among the masses.  Hidden behind faux altruism, a typical response may, in fact, be that they are "not perfect" nor have they ever claimed to be; however, they have no desire to expand their consciousness, correct fallacies, or even admit they are or were ever wrong.  This is often difficult because people don't believe what they do because they feel it's "wrong" or "incorrect."


What Can Be Done About It?

As social media, gaming, and digital content prevail as the forefront of building God Complexes among the masses, the only real way to overcome this type of psychological pandemic is on a personal level via spiritual growth - an admittance and acceptance of one's own human fallacy and movement to better oneself.  The majority of the world has moved away from spiritual growth and has focused on material belongings and fabricated joy via short videos and movies - it's about time to return to personal growth.  Prayer / Meditation, acknowledgement of errors (sins), acceptance, forgiveness of others and self, etc remain the leading methods of building oneself spiritually without having to force supernatural doctrines (i.e. God or gods).  There is much more to spiritual growth and self-control / self-growth than New Age occult beliefs as well.  As Mohatma Gandhi once said, "be the change you want to see in the world."  In order to do that, though, we must put in the proper work into ourselves (continuously throughout our lives) to achieve it.