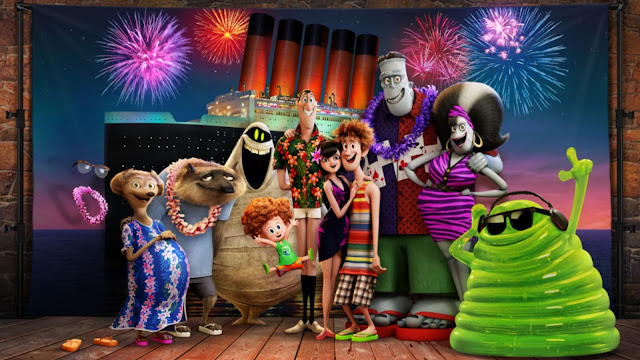 Alright, here's the drill... do NOT read if you don't want to know any spoilers.

The other day I went to see the 3rd movie for Hotel Transylvania. Having seen the first 2 movies (and really enjoyed them) I found myself waiting in anticipation for this 3rd film to come out.

Hotel Transylvania follows Drac (Adam Sandler) along his journey as he learns to let go as a parent and realizing that his daughter is growing up. The first 2 films focused on Drac and Johnny (Andy Samberg) or Drac and Vlad’s relationship. He has also had to come to terms to appreciate non-monster-defanged-humans. Which brings me to the this latest film.

The 3rd installment of Hotel Transylvania switched it up from Dracula being worried about his family to him worried about himself. He was unsure if he would ever “zing again” (fall in love). What I enjoyed most about this story was that they incorporated more of a father daughter story arch that had been a bit absent from the first two movies. Mavis (Selena Gomez) worried about her dad and seeing that they didn’t get to spend much family time together mistakenly thinks that her father was lonely because of that prepares a surprise trip.

The monsters end up on a monster cruise where Drac zings with the captain of the Legacy Ship, Ericka (Kathryn Hahn) who also happens to be the great granddaughter to Abraham Van Helsing (which also makes her the enemy, unbeknownst to Drac).

Being the best-est of friends, Drac’s buddies try to get him to get his zing on. Hesitant at first, he sneaks around Mavis’ back to protect her from finding out; even ball tapping Griffin (David Spade) to shut him up - yeah, I caught. Way to make it entertaining for the parents in the room.

As a daughter who was told as a child that “you only zing once” Mavis finds out that Drac has zinged for a 2nd time, shattering her beliefs. I felt this helped Mavis’ character change from being the little girl who sees her dad as a committed single parent to seeing him as a person. It’s a big step when it comes to realizing that your parents aren’t super, that they too have had their fair share of mistakes and sometimes what they say isn’t always gold.

Aside from the touchy father daughter stuff, I found that Hotel Transylvania was entertaining overall. With homage to Gremlins in the cockpit and creating havoc throughout the flight. It was interesting to see the practical little monster become part of a children’s animation movie. Let’s not forget the homage to Indiana Jones when Ericka must retrieve her family heirloom. Despite the similar it brought Drac and her closer as he saved her life with every step… literally.

As soon as the final stop for the cruise was in sight my first reaction was that Atlantis is Las Vegas for monsters, with King Neptune being the main attraction and Frank feeding his gambling problem. My only question is, why closer to the end when everyone was moving to the part, were kids brought to what seemed like an EDM rave? However very enjoyable nonetheless. It also played well with Ericka’s character having the children there; when she makes a decision to save Winnie, a monster, as danger approaches.

Speaking of Winnie, after the movie I had to explain to my nephew (because he asked) why she wanted Dennis to look into her eyes and the definition of Zing. In return Dennis’ line “I’m too young to zing” had the audience in an uproar.

To add in, because it hit where home is for me as someone who really enjoys mythology. I thought the chupacabra joke was spot on with the goat in the glass.