The First Purge - A Hooligan Review 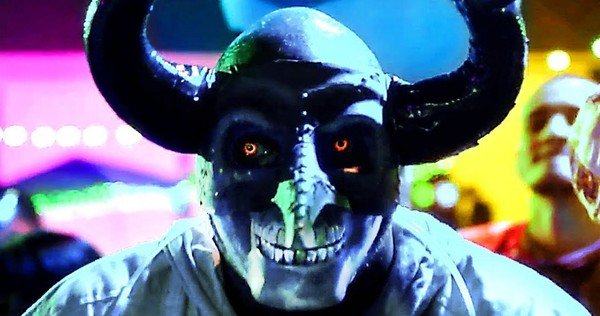 The Hooligans went to go see The First Purge tonight as we wanted something thriller-ish but also wanted to low-key make fun of while we watched it. In those respects, we had probably about a 70% success rate - not the making of fun of part but the thriller side. I won't even get into into that weird mid-credit TV spot they marketed into their own film (other than this time).

The First Purge is a Blumhouse Production starring Y'lan Noel, Lex Scott Davis, and Joivan Wade. It was directed by Gerard McMurry and premiered on Wednesday, July 4th. Beware as there are...

The First Purge had an interesting setup as a prequel. A social experiment confined in Staten Island by the "New Founding Fathers" in order to justify how it would be "healthier" for society to allow people to let loose. I will have to say that my favorite part of the whole movie was the "pussy-grabbing son of a bitch" jab. I couldn't stop laughing at it even though it was uncomfortable to watch the shithead perform a sexual assault on film (as they always are). The follow-up right after was warranted in that matter and helped ease the tension.

That's about all that was good with the movie. Well, most of the main actors did really well in their performances, and it didn't seem like it was forced (see below) and actually felt like the makings of a great drama rather than a Horror/Thriller as it was marketed.

I'm going to be completely honest at this point and tell you that I missed the climax of the movie because I had to take a major dump. I'm only saying this now because I'm sure that the action portion of it would have at least resembled entertainment compared to the snail-paced movement of the story they tried to say was there but was absolutely underplayed on so many levels. I haven't gotten sleepy at a movie theater in a long time, but I found myself getting bored waiting for shit to just happen (and not the shit I took during the movie either). I mean, we've seen how many Purge movies now, and you want us to believe that drawing out the tension up to the first blaring horns is somehow going to surprise us?? Poor decision on that one. I literally was like, "this is the first purge... nobody's going to do shit as soon as it starts, so showing all the crying innocents doesn't play well," and they did exactly that. Additionally, I didn't really feel like there was a danger level like what was present in the previous films, which is saying something cause they rely mostly on jump scares.

Speaking of pacing, we both found the editing to be a bit off-kilter. There was some weird moments that were like, "let's throw this half scene in here to show she's pissed off for a second. I swear it drives the story forward." Like no, bitch, play out the drama - don't cut it in half! It felt like one of those moments that was going to start parallel storytelling between two locations but never actually went back to the first moment again... just left the anger flaccid with no sense of a refill on Viagra to pump up the volume again.

Let's take a moment to talk about the VFX for this film. Although one would think that a horror company like Blumhouse would opt for a bit more SFX blood (even just a little), The First Purge is rife with fake CG blood splatters and spills. I can understand having to use them from a production standpoint, but their use looked vastly rushed and amateurish. I'm talking about out-of-focus background scenes with clean blood outlines rather than a blur to at least attempt to match the focal length. Sloppy, guys... just sloppy.

Additionally, the very first VFX blunder that showed up was Marisa Tomei's weird outdoor green screen during an interview with horrible highlights. All I'll say is that at least the lighting matched. I know the shit show it can be to do green screen, but I expected a bit better than a half-step above what I can do myself in a day.

The beginning was just weird with close-up shots on a therapist who I don't think was a main character and the Skeletor dude (Rotimi Paul). From the get-go, I already had to stifle my laughter. The Skeletor dude (my official character name for him) was like watching Shawn Wayans in Scary Movie when he got the dick stabbed through his ear... just over-the-top to play to fan service. In fact, his character felt genuinely psychotic at the block party when he built-up the tension of killing after that one girl was grinding on him - they needed more of that style of him if they were looking for psychotic, creepy, stab-you-with-3-syringe-Hero-ine-claws-type of character (that was Hooligan V's combination of "heroin" and "Wolverine" ergo "Hero-ine claws").

While we're on the topic of the Skeletor dude, I was informed of two awkward climax plot points that I found a bit strange (because I was told about them, not because I watched it happen - please see "major dump" statement above). One was the fact that Skeletor dude was killed off by the mercs rather than one of the main characters or at least during the shootouts with them. That means there was zero redemption for the weak lil bro Isaiah (Joivan Wade) to grow as a character; not to mention botching a clean shot like a moron with his gun to his head already. Seriously, just pull the fucking trigger at the murderer ready to murder you.

The second awkward point pointed out to me was that Nya (Lex Scott Davis) completely threw out her principles about NOT purging right after the mercs said the house was clear. They could have literally just kept hidden, let them clear out, and be safe like they planned, but she was like, "naw, fuck this shit - let's make this plot more interesting!" The only character I felt had somewhat of an arc was Dmitri (Y'lan Noel) which I could have sworn wasn't the protagonist from the beginning the way they told this story.

One of the last points I'm going to point out is the blatant political bashing. I mean, I get it... but I didn't watch the 3rd movie cause it looked like a piece of political trash waiting to be spoon-fed to us disguised as "entertainment." Taking a didactic approach to a movie rather than an actual story to entertain is ALWAYS a bad idea. Throwing political bullshit into the mix - no matter what side it's on - is like ordering the bottom-shelf expecting it to be top-shelf material... just leave it alone; it doesn't work. However, my favorite is still the "pussy-grabbing son of a bitch" line. Throw it in here or there maybe, but in a manner where it's justified and not by some douchey bit role character trying to force "funny" or a blatant overcompensation because you hate the government. That's what satire is for, and this is NOT a satirical movie.

As mentioned earlier, the underplayed story was supposed to show how the Purge actually came to be which felt like a B-Story with a rushed resolution to "silence it all." If you wanted to make a political-driven background to play out the drama and tension - then do it. You had so much more potential to make that happen and failed miserably doing so. Don't market it like it's going to happen, NOT deliver, and then make a film like you decided halfway through to kill people because you think that'll make everyone forget about it. Politically-driven tension to drive towards violence is much more entertaining and very different than taking a didactic, I-don't-care-about-story take on it just to start shooting up the violence factor. Justified violence (especially in terms of an antagonist or an antihero) adds way more interesting angles to come from than just shit ones.

I will say that our instincts were correct (mostly Hooligan V's) about using The First Purge to poke fun of it all the way through; not that the Honest Trailer for the first 3 Purge movies we watched before going in helped that factor at all to begin with... In all honesty, I didn't find it as entertaining, as gory or gruesome, or as compelling as it didn't add or up any level of tension to the existing franchise whatsoever. It was like, "hey, let's make an origin story of The Purge but fuck entertainment; I've got more political metaphors and euphemisms to make!" Please go back to making stories again, Blumhouse. Please be better at what we know you can do.