THE DIGITAL DEMON: The Lost Art of Retraction - When Ego and Hubris Reign 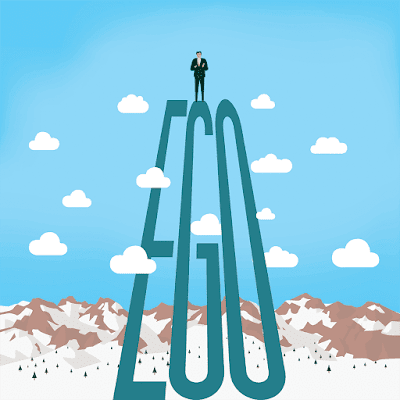 During these tumultuous times, uncertainty seems to have reached a pinnacle in the midst of the pandemic, social media legislation, and the protests (and riots) spawned from George Floyd's unjustified death.  In one week we've gone from "we're in this together" and "support small business" to vandalizing and looting those same people.  Yet, in the midst of the righteous albeit emotional response to rise up against an unjust brutality, a new demon has arisen across social media which further clouds logical judgment: hubris.  Most of what I typically speak out against is the hypocrisy of soapbox warriors cloaked in faux altruism.  This tendency most knowingly originates from my need to keep myself ever vigilant against any of my own hypocrisies that may exist or manifest.  However, the prevalence of overly-emotional driven actions justifying crude, violent, and downright immoral behavior has become a massive self-sustaining problem with little oversight into any newer or improved future any time soon.

I feel the need to point out that I am a huge advocate for those exercising their right to protest, even without a "permit."  However, I draw the line when protests compromise safety - vandalism, looting, igniting fires, attacking passersby, etc are all actions I won't condone.  Such activities are vastly counter-intuitive to the advent of promoting actual change.  If your conflict resides from a current mistreatment, then mistreating others in a similar (or even alternate) manner nullifies progress forward, including the altruistic fight for "equality."  But it is that "equality" which comes directly into question when protests turn violent.  The "eye for an eye" mentality is not a valid method of rectifying injustice when turned against innocent lives.
But oh what a world we live in as social media becomes the proprietor and purveyor of propaganda while pretending to be unbiased.  As I mentioned before, my biggest qualm exists in the hypocrisy of those constantly projecting hatred and pretension.  Only a couple weeks ago, there were groups of people organizing protests against the state government over the mandates to wear masks and to continue with an extended shelter in place while people's livelihoods were directly jeopardized - they ended non-violently.  Most people against the protesters called them selfish and stupid as they "disregarded safety" due to the current pandemic.  However, many of those same toxic people are now the loudest advocates for the current protest for George Floyd.  This sort of flip-flopping becomes rationalized under the guise of faux altruism and only when aligning with one's own personal views.  Individuals facing the hypocrisy turn a blind eye as the brain defends itself (naturally) from the cognitive dissonance when they're called out on it.  This is exactly why most people almost never reply to such statements - their ego and pride become so entrenched into their own emotional beliefs that anyone with an alternate view or belief somehow becomes invalid, insignificant, and eventually inhuman in the eyes of the hypocrite.
I've been countered with attempts to justify the violent tendencies yet none of them speak to the actual hypocrisy of calling earlier protesters of different values as violators of safety.  So which is it?  Either you see protesting during a shelter in place as idiotic and threatening the health and safety of others or you are an advocate for it?  The idea that both can exist but only in terms of what you agree with is a dangerous and bigoted view.  When the ego becomes the precedence of fairness and equality, it becomes ever clouded by emotion and hubris.

One of the more disturbing transitive effects leading up to rationalizing violence (especially in areas with no significant hate crimes committed by police, like the Bay Area where I'm from) stems from the ego touted as social justice.  It's amazing to see otherwise logical, intelligent people in the area cheer on violent behavior rather than the protesting movement despite most everyone agreeing the actions taken against George Floyd were horrific and call for justice (most all police officers and government officials included).  Newscasters and social justice warriors constantly feed the narrative that people are "just releasing their frustration."  However, as mentioned, my own area is not known for such acts - it's known for its minority as the majority - so why are those volatile emotions turning up here?  Additionally, letting frustration reign over logic does not give credence towards justice when turning to violence, looting, vandalism, etc.  I wouldn't be able to bust open your car and set it on fire if one of my loved ones were murdered, especially when you weren't involved with it.  That's not how justice works and is a poor excuse for instant gratification that demotes forward progress.
These dangerous grounds the masses tread indulgently derives from "what I feel justifies my [crappy/illegal/bigoted] action/response" regardless of relation (or non-relation) of the incident to themselves or to others.  The "gimme mine" mentality feeds the ego this sort of rage when there is little to no attribution of actual empathy or compassion towards others - mainly only talk of it (little to no action).  That sort of mentality disregards people as equals (the very root of the protests).  Furthermore, the move toward altruism alleviates the hypocrite from personal accountability, meaning their defense mechanism pushes to preserve the hypocrisy by justifying it by the abstract of "justice."

THE POWER OF RETRACTION

Speaking of accountability, there is a lost practice which helps close out hypocrisy that is no longer done: retracting one's statements.  Among those that complained about their safety being compromised in a protest they didn't agree with, not one of them retracted their original statement in the light of the George Floyd protests.  Instead, the hubris within overpowers the need to shut down such a hypocrisy because they weren't "accountable" for their own misguided principles to begin with; it was purely reactive instead.  Reactions don't give enough weight to an argument when organized or premeditated actions such as protests take place instead.  It should be clear, though, that changing one's mind (especially openly) is a good sign of setting the ego aside to grow and include other people's views, and it is not the same when flip-flopping stances to push one's own egotistical agenda.
In a not-so-distant past, journalists who preemptively take one stance would often issue a retraction of the statements if proven incorrect.  It allowed for humans to be treated as humans by recognizing the irrational, reaction-based emotions that fuel prejudice responses.  That practice, sadly, does not happen any longer.  The idea of infallibility has prevailed in even the most studious of people - it runs amok with politicians on all sides.  For example, it's fascinating to see people talk of "worshiping Trump" when those same people idolize Obama in the same manner.  I personally find idolizing people leads to a "do no wrong" mentality and further perpetuates blind allegiance instead of prioritizing individual discretion.  The sensationalism riding among the modern mainstream media runs thick without recognition among the people who become so accustomed to thinking less they accept it without question.

Hubris prevents the individual from admitting failure as the concept of infallibility continues to rise.  In a previous article, I wrote about how current technological advances (i.e. social media, video games, etc) perpetuate God Complexes as we further disconnect from actual social harmony.  Bringing back the action of retracting one's statement may be but a simple step towards bringing the masses back to zero in order to move forward once again, however, it will most likely drown in the propaganda of social media anyway.  As someone who frequently uses the retraction (when warranted), I can only speak of my own positive experiences from the choice.  Whether or not it could have an impact on the hegemonic symphony of hypocrisy will only be seen in hindsight, granted if people actually follow it.  Remember: violence begets violence, not progress.  If we're truly in this together, then live by exemplary action, not diminutive emotional reactions, and treat each other as such.  Be safe out there.