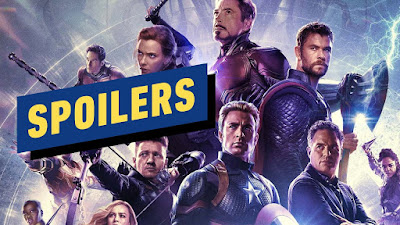 After 11 years, 22 films, and countless epic visual effect-laden battles, the MCU journey has come to a head with Avengers: Endgame.  We didn't splurge for opening weekend tickets, but we saw it today instead.  Wow!  What a ride!  So here it is - our Hooligan Review of Avengers: Endgame.  You are warned as there are...

After taking some time to reset our feelings to zero and giving ourselves props for not having to get up to pee for 3 hours, Hooligan V and I were finally able to think about some of the major points that is Endgame.  There are so many great things about the movie that it would take WAY too long to go over them all.  We're still buzzing over the extraordinary story they've built for us to enjoy, so we will be going over just a few of the best ones that stuck out to us as filmmakers, and some of the worst ones as well.

Endgame has a great structure in that it calls back to many of the previous Marvel movies by nature of story rather than forcibly injecting fan service (as what Solo felt like).  My particular favorite was seeing Stan Lee again looking so very lively and energetic in his cameo.  It was so fitting to see him one last time in the end.  He'd be proud to know fans aren't knowingly spoiling his decade-long plan for the sake of being assholes.

Hawkeye made his return in the very beginning as we witnessed "the snap" kick-start the most prominent character arc of Endgame since most of the other characters are just themselves adjusting to the loss.  Clint quickly goes dark side after being away from the events of Infinity War and begins cleaning up the world of the left-over evils lingering behind.  As soon as the opening scene ended, we already knew it was going to be emotionally heavy as we watched Clint's family disappear without him even understanding what was wrong, forcing him to figure out what happened - we all saw that remnant of familiar dust lingering in the wind that he didn't even recognize.  It wasn't until his ownership of his faults while fighting with Natasha for the right to die (properly) for the Soul Stone that brought his redemption and weight of sacrifice back to the light.  It also made his payoff so much more heartwarming when the call came in before the final battle and moved aside to create headway for the massive wrecking ball of "I... am Iron Man."

As the rest of the Avengers are dealing with their loss to Thanos' snap in their own ways, each one of them had something to gain by recalling the emotional moments of their pasts; the most notable being Tony Stark, which has overshadowed him and everyone since the end of Infinity War; it's also why Tony is the second Avenger to appear in the movie, and rightfully so.  The 3-hour time limit didn't feel like 3 hours, which is a great sign that the multi-plot took hold very well.

The last point I'm going to note here is the little callback at the very end of the credits.  There was no post- or mid-credit scene, but there was an audible that signified the true end.  The clanging of a hammer from the very first Marvel movie that started it all with Tony Stark creating the very first Iron Man suit in a cave.  It felt like a proper bookend to this long journey, and was one last, great signal to show it really is over.  As Thanos alluded to, there's huge potential that lies ahead even though there are those of us stuck in the sorrows of the past.

Out of all the great components thrown into Endgame, there are bound to be some bad parts to it as well.  One of my biggest qualms is with the story's predictability of major plot points: Captain Marvel saving Tony in the beginning, one must die for the Soul Stone, the moment when all the Avengers assembled to fight Thanos and his army, Captain Marvel coming back to save everyone in their time of need, Cap staying in the past, etc.

The second biggest aspect that didn't really sit well with me was the Bulk (Bruce + Hulk = BULK).  It was reminiscent of the drastic character change of Thor in Ragnarok (not that I still didn't like the movie, I just didn't feel he had enough motivation to change).  I digress, but it just felt strange and diminished the weight of his conflict from Infinity War with a simple "scientific bypass".  Brushing it aside after making it such a huge deal in Infinity War just felt dirty.  The Bulk became the least empathetic character the moment they reintroduced him and became one of the most uninteresting leads from then on, which is truly unfortunate.

Going back to Captain Marvel... I felt they missed a huge opportunity to utilize her so much more than just a random trump card that saves the day just in time whenever it's convenient for their purposes of story.  I wanted more of her considering she's supposed to be the strongest Avenger.  Yes, they tried to show that when she went head-to-head against a fully-stoned Thanos, and he hits her without phasing her at all... but then she can't seal the deal??  How??  Overall, it always had to be Tony that finished it, but it felt like another huge throwaway for no apparent reason.

OK, now to the nitty-gritty of what's been bugging me about Endgame: Time Travel.  I felt like it ended up being explained away as just wibbly wobbly, timey wimey stuff.  I understand the need for making any sort of science as "quantum physics" to explain away plot points for the sake of fictional, artistic license, HOWEVER... the rules of the Universe must remain consistent to that which you have built, and the obstacles they encountered do NOT adhere to the rules they set up for themselves.  I can agree that their future selves going back into the past is technically maintaining a linear time experience that doesn't change unless they interfere with their older selves... but Cap, Tony, and Ant Man did exactly that!  Loki got away and stole the Tesseract, which means it's NOT on the same timeline anymore.

Some have said that Cap going back and returning the stones to their original times they were taken from would essentially return the timeline to its original form (e.g. Thanos snapping half of existence away)... but when Loki got away that was no longer the case.  That moment was NOT the same moment that the Avengers took the Tesseract.  Tony and Cap traveled back in time to right after Captain Marvel's story when Nick Fury was still young.  So, returning the Tesseract way back then does not return Loki escaping with it in their first attempt.  That also means that Thor does NOT return to Asgard with Loki along with the Tesseract, Ragnarok does NOT happen with Loki there, and Thanos does NOT attain the Tesseract from Loki at the beginning of Infinity War.  Those timelines are now in alternate timelines and the new "snaps" that took place are essentially in vain.

Even if you believe the new timeline didn't change the future, there is still another HUGE factor that does not make their theory work, and that is Thanos traveling forward in time from 2014 before he has any of the stones.  If the "future" Avengers can travel in the past and not change their timeline, that does not hold true for their past selves traveling forward.  In that case, Natasha, Gamora, Vision, etc, could have all been saved and brought forward without a problem (Gamora possibly surviving the final snap is proof of that as Quill is searching for her on his screen before Thor and Rocket board).  Also in that same scenario, returning the stones wouldn't make any sense to "maintain / return the timeline" since the past Thanos had already been killed in the final battle in the future of Endgame; that timeline wouldn't be touched regardless.  It's one huge problem in making it all truly complete for that Universe and subsequent Universes / timelines to actually make sense.  Even if Cap was planning on using time travel for one last chance to find happiness back in his own time, he could have done that without returning the stones at all since their timeline / future happened regardless.

Despite the strange, conflicting nuances of time travel for the sake of a compelling plot, Endgame was still a fantastic piece in the MCU.  I am still down to watch it again and relive the emotional roller coaster that it took me through.  The wrap-up of it all, the bookend of Tony Stark / Iron Man's iconic journey, the last time we see Stan Lee in a cameo... it all came together in one wonderful piece.  All good things must come to an end, and this end played it the only way it knew how - in one epic finale.  Whether you enjoy superhero movies or not, there is no way anyone can deny the impact Marvel has made on the world over the past decade.  Others have tried, but these will definitely survive the test of time.  Thank you to all who helped make it happen!