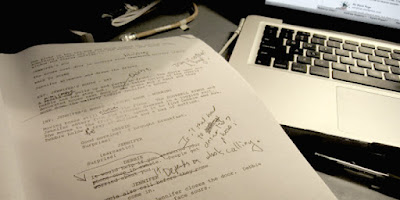 We often talk about high concept stories when it comes to the marketability of film projects. One of the most typical explanations to determine if a story is "high concept" is that it can be explained in one-to-three sentences, however, that alone does not typically make it high concept. An article by Steve Kaire on MovieOutline has a list of 5 criteria for a story to qualify as high concept (http://bit.ly/2DDtOgP), and we happen to agree. The criteria are:
1. An Original and Unique Premise 2. Mass Audience Appeal 3. A Story Specific Pitch 4. Obvious Potential 5. A One-to-Three Sentence Pitch (LOGLINE)
Crafting a story to be high concept is best done from scratch rather than trying to shift your non-high concept story into a high concept one. Not that it can't be done, but it is often difficult for writers to kill their darlings and make major changes to ideas they're attached to. It should also be clear that non-high concept stories are not necessarily bad stories but rather their marketability is not pitch-centric. Art house movies, anti-plot films, and cult classics fall in line with non-high concept stories that still do well on their own. Oftentimes, it is not apparent to a new audience member why they should watch an anti-plot or art house movie without having to first explain why its differentiation is worth their time.
If you are looking to write a high concept screenplay or want to develop a high concept film, these are the factors you must consider early on.
ORIGINAL PREMISE
With the slew of remakes and sequels, threequels, and further, audiences have been starving for original stories. Though the structure of storytelling has not necessarily changed, the ingredients they're made of constantly do, and these ingredients typically derive from an original premise. A premise is the simplified version of what drives the plot.
One method for creating a premise is the "what if" exercise. What if a small town is terrorized by a shark (Jaws)? What if there were a hotel just for monsters (Hotel Transylvania)? What if a high school teen were actually a Greek demigod (Percy Jackson)? We enjoy this method to get the creativity flowing as opposed to closed-ended statements of what a story is about (we save that for loglines). Another popular method is to take an old story and add a different hook or twist to make it new and original: a contemporary telling of the Taming of the Shrew (10 Things I Hate About You); Pride and Prejudice in modern England (Bridget Jones' Diary); or an animated Treasure Island in space (Treasure Planet).
MASS AUDIENCE APPEAL
There's an old idea that filmmakers need to build their audiences. With social media, streaming services, and the vastness of the Internet, this idea is no longer prevalent as information and entertainment are readily available at the click of a virtual button. Build your fan base, not your audience. Your fan base will grow with the more high-quality films you deliver. Audiences, on the other hand, are built in to genres. This is why genre films sell the most tickets as opposed to multi-genre films. Horror fans will go see horror films; you don't have to create a demand for them - they already exist! Despite popular belief, audiences enjoy comfort in what they are going to watch - few people won't go see a movie they know nothing about. This is also why marketing plans launch before production even begins.
STORY SPECIFIC
Your pitch must be story specific to highlight its appeal for audiences to watch it. Well-crafted loglines convey the genre, protagonist, antagonist and/or conflict, setting, and general plot of your movie into one to three sentences; the best ones can do this in one sentence within 35 words or less. By limiting loglines to these main elements, people will let the story lead their interest rather than a long-winded explanation of why they should think it is interesting, different, or likeable - leave that to the story to establish.
OBVIOUS POTENTIAL
If you're pitching a genre film, then the genre must be apparent to the audiences that enjoy them. As mentioned, multi-genres do not play well most of the time because audiences enjoy the familiarity of the genre they're going to see. Trying to sneak in a romance story instead of the horror film that was promised to them will drive audiences away from seeing your next film. Sticking to a particular genre increases its potential for success. Trying to pull in multiple genres muddles up the numbers and audience repeatability (I've lost count of how many buyers have asked specifically for genre films).
LOGLINE
Though many may disagree, we believe the first pitch is and always has been the logline. Every person that browses new titles read the short descriptions in order to decide whether to buy, watch, or move on. Treating your logline as your front line sales pitch rather than just a description of your film will level up your ability to market your movie the right way. Being too vague or too specific can turn audiences away, so hitting that sweet spot of 1-3 sentences will streamline your efforts.
Pitching is an art in itself, and many indies neglect this factor choosing novelty or originality in lieu of the 4 other criteria that can make a story high concept. There are many more factors involved in creating a well-crafted pitch and even more materials depending on the level of pitch you are aiming to deliver, but it all starts small with these 5 criteria. If your aim is to deliver high concept films, then look to check mark these in your process of crafting that logline and expand from there.
If you would like a private consultation or script coverage based on these ideas, please contact us through our website: www.hydehooliganfilms.com and set an appointment up.
Written by: J Hooligan