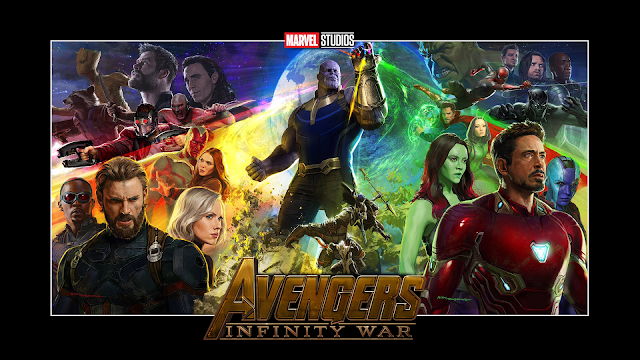 Whew! We finally made it out to the theater despite running across a few spoilers here and there, but in the end they didn’t truly ruin the overall experience of the movie. This is definitely one you’ll want to see in the theaters if you haven’t yet.

Infinity War was really well done! The blending of many characters (even similar ones) went a lot better than I had anticipated. The action sequences were on point, and the story had many facets and sidelines that didn’t muddle up the main arc too much. Most of the banter was fresh and lively and kept a light-heartedness that counter-balanced a lot of the “impending doom” moments.

I am particularly a fan of the ending. To me, it ended perfectly. They didn’t even need an end-credit sequence and could have finished it as is (I would have preferred it that way). Though the end-credit scene was funny and gave a ray of hope, I felt it was more fan-service than anything and sort of made me rethink their intentions for how they planned this film to play out. It is a downer ending, but it was done so very well. I like that they let Thanos keep true to his word and take out half of everyone even if they spent a lot of the movie attempting to humanize and rationalize his way of thinking (which they did). It showed that the bad guys can win, which is quite bold and daring in the slew of superhereos always coming out on top. However, that tone was set with the very opening scene, so I feel that it shouldn’t have been a surprise or as emotionally taxing as some people have been claiming it was to them.

The pacing moved pretty quickly. It’s to be expected in a huge ensemble of superheroes but some moments felt a bit rushed (e.g. Starlord and Thor’s first interaction and quick separation). It truly felt like there was movement through the whole film, which can be unsettling to some viewers. Let’s be honest, though, this is an action flick. The final battle alone was a whopping 25 pages long in the script.

I did feel that they did more of a throw-away job at explaining some of the other characters not present. Part of the story literally took 2 characters that were “taking a break” and “couldn’t be found” and were found only minutes after showing where they were ready to go back into it all. The 2 missing characters wanted to “take a break” and “stay with/protect their families.” Really?? Because the fate of the universe isn’t enough to get out of house arrest/surveillance to go save them (looking at you, Hawkeye). Come on, guys, didn’t Clint already break away from his family in order to help save the world?? It seemed like a really poor explanation. If anything, they could have hinted more that they were wrapped up in something else. Even if Marvel tries to put that aspect into the next movies, it still felt like a shit excuse now.

Additionally, there were a few moments that I found myself lost in the lack of quality in the VFX department, and I wondered who was in charge of the scene. The close-ups were fine, but some of the wide shots seemed a little half-assed and not up to the level of what Marvel has brought to the table. Still, it wasn’t many as the rest of the film was done cinematically well.

If you haven’t seen the previous Marvel movies, you may be at a loss of who is who or how they got the way they are now. There were a couple moments Hooligan V had to ask about as she missed a couple of the films before seeing this one (shame!). However, that’s not to say that if you’ve not seen one or two that you won’t enjoy this movie.

My biggest qualm pertained to the moments when the sarcastic banter seemed to pull in other characters that weren’t necessarily along those lines - particularly Thor and Hulk. If you haven’t seen 'Thor: Ragnarok', then be in for a huge shift in both of their characterizations which they tried to bring out here as well. Forcing hard-set character spines that were set up in previous movies into sarcastic, cynical, almost bumbling newer personas takes me out of the experience that was already established beforehand.

Marvel did a fantastic job with the roll-out of films to build up to 'Infinity War'. If you missed our live video, we mentioned how 'Justice League' missed its mark with this, and that Marvel had a much better sequence of releases from the beginning. This isn’t to bash on DC or anything, but 'Justice League' literally needed half the team to be introduced with backstory along with the main arc to create any sort of empathy for them. That takes time to establish and doesn’t create enough involvement as key players. Before the first Avengers movie was released, every single one of them was already an established character (not necessarily meaning having their own movie). In doing so, and continuing along those lines throughout the phases, it allowed audiences (comic book fans or not) to enjoy 'Infinity War' as a massive ensemble film.

'Infinity War' was a great ride overall. Again, if you haven’t seen it in theaters yet because you pirated the shit out of it (you monster), then I would highly recommend that you go. It’s also recommended that you watch the majority of the other Marvel Studio films before seeing it in order to get a better grasp of where each character or group of characters is at when this begins - it literally picks up right after 'Thor: Ragnarok' ends in the mid-credit sequence. I hope you enjoy it as much as we did.