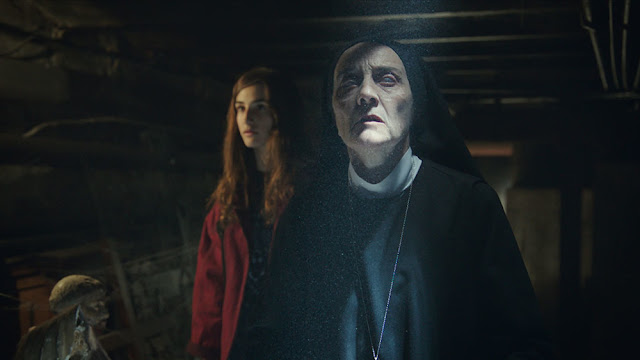 Hooligan V and I recently decided to finally take a look at 'Veronica' on Netflix last Friday night. We’ve seen the PRs claiming people could not finish this movie. So we did a Live Video of us watching the movie for the first time so people can see a real first reaction rather than a planned out, censored version - albeit a bit of a beer-influenced one. If you haven’t seen the Live Video - no worries, here are some of our thoughts from our initial reactions.

The cinematography was done really well. A lot of the VFX from what we saw was integrated seamlessly unless you’re specifically looking for it to gripe about to people. It had a consistent look that played all the way through the movie which was probably it’s only saving grace. There were a couple of moments that grew suspense and got to us.

Despite reports of being “too scary to finish,” this movie was not scary at all. Even more to the point, the moments of suspense they built up were quickly played out and diffused, making it feel as if they were strung out too long. It’s filmed in Spanish, which is fine.  We’re used to reading subtitles for foreign films and anime, though there seemed to be a disconnect trying to connect with larger audiences - that fact may take some people out of the experience.

Because of the problems mentioned above, there are many moments where we asked ourselves how much longer the movie was going to play. One gauge we use is if it feels like it’s longer than it’s runtime, then that is a good indication that the story is not engaging.

If the majority of the audiences that claimed they couldn’t finish this were highly religious-based, then I could possibly see how that could be the case. However, for international audiences (especially from our Americanized POV), it’s much harder to get a rise out of us from this. The style and pacing is quite different, and lingering on specific moments took us out of the story, lessening the fear of what was going on, except for maybe one or two parts. To be honest, we felt better that this wasn’t a theatrical experience otherwise we would have been upset.

That’s just our views on it. If you enjoyed the movie, then cool, but it’s not anything we’d recommend for avid horror audiences. For us, we had a good night drinking.